The Man In The Queue - By Josephine Tey - Pity Poor Jerry Lamont And The Back Pedalling Author? 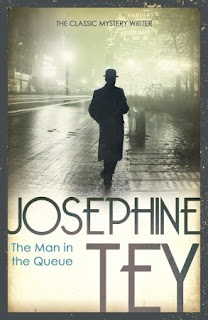 Lawks, with a mug like Jerry's he didn't have much chance of gettin' away. Four years he'd lived with Albert Sorrell, no other friends, no girl friends. They'd gone everywhere together. And now Sorrell was dead - murdered - and Jerry was in the frame. Things weren't helped when Inspector Alan Grant was visited by a Frenchman he found beautiful and intelligent, who had seen Jerry's mug and could describe it...

I suppose I'm addicted to vintage murder mysteries. Those written in the so-called "Golden Age" of detective fiction - the 1920s and '30s - being particular favourites.

And so I happily plucked a copy of Josephine Tey's The Man In The Queue from the shelf at my local library... and ended up wishing I hadn't...

Why is this? Well, my goodness, the book was written in the 1920s and the use of the term "dago" might be a good reason. I mean, this is the 21st Century! Pass the smelling salts! A friend of mine who had read the tome professed herself severely upset by the use of the term. It was "appalling". But this friend had just spent several weeks proclaiming that everybody who voted for Brexit was "scum", "racist", "stupid", "hateful" and so on - so one couldn't help thinking that she was seeing the beam in the 1920s' eye and ignoring the mote in her own.

So, it wasn't the "dago" aspect that cheesed me off. The past had its own prejudices - just like the present. I can handle that.

But what got me down about the book was the grim way it treated the character of Gerald "Jerry" Lamont, and the strange world of "what is Miss Tey saying?" in which I found myself.

Firstly, I found myself pondering on the sexuality of three of the major characters. Was Inspector Alan Grant gay - or whatever the term was then? The appearance of a "beautiful" young Frenchman as a witness early on seemed to have a great impact on him in a way I found intriguing. It cropped up twice - once near the beginning, once towards the end of the book. Then there was the relationship between Albert Sorrell, the murdered man, and Jerry Lamont. Apparently, they lived together, worked together, went everywhere together, did everything together, hardly ever had visitors - apart from two men on one occasion, had no other friends - certainly no girlfriends Were they lovers? They had lived together for four years. Both were in their early thirties.

Having researched quite a lot of family history, with a particular focus on the era 1880-1930, I found their behaviour to be rather unusual, even given the "more innocent" times. And this was not the kind of thing I was used to from Christie, Connington, Sayers, etc. I'm a seasoned reader of vintage mysteries.

I felt that Miss Tey was vaguely pointing at something she dared not quite say out loud.

But this notion was ripped up as Jerry Lamont, on the run from the police and staying at a remote highland manse with a strict old minister, his sister and her daughter, developed, in just three days, intense feelings for the daughter. A woman, the book noted, with a no-nonsense, logical way of thinking - and a good deal of life experience...

Of course, Lamont could have been bisexual or he might just have developed a strong platonic feeling for the woman.

In the emotion of the dramatic situation, you might expect people to get carried away but, for her part, Miss Dinmont was unaware that Lamont was on the run - and three days, with a strict Uncle and Mother on the scene, is not a great deal of time to develop strong romantic feelings towards a visitor - certainly not enough to prompt the no-nonsense, worldly, logical woman to travel hundreds of miles to the police court hearing when Lamont was finally apprehended.

I felt that this was the stuff of daft romantic fiction and a convenient way of bringing the book back into line with the conventions of the time.

And it bored me.

And Mrs Everett, Lamont and Sorrell's landlady, suddenly revealed that Lamont always told her everything - even about "girls". Um, but the book had stated earlier there hadn't been any. At least for the four years he had lived with Sorrell under Mrs Everett's roof.

I felt that Josephine Tey was either being very inconsistant and had not been concentrating on what she'd been writing - or she was back pedalling. She'd "got the wind up". She was "retconning" as they say nowadays.

And then there were the sufferings of Lamont - good grief - what a rotten time he had.

The least of his problems was Inspector Grant referring to him as a "dago" (Grant later redesignated him a Londoner). Lamont took it all well - apart from some desperate use of a pepper pot at one point.

And the "justice" system was just about to see him hung when the real murderer confessed.

There are things to enjoy about this book. Grant's insights into the devinely named but not so devinely natured Ray Marcable's stage performance, for instance (great insight into a theatrical "type" here!), and a discussion about mixed white "race" individuals (not terribly daring - but with the presence of the bigoted old Scots Minister, it was fun), but all-in-all I felt The Man In The Queue failed to live up to expectations.

Maybe it would have been better if we'd actually had some proper resolution to Lamont's suffering as part of the closure - a lovely, slushy scene in which he plighted his troth to Miss Dinmont or, better still, told her that his heart belonged to the late Albert Sorrell and, despite Albert's newly revealed fixation with Ray Marcable and deranged murderous/suicidal intentions, that would always be so.

This, coupled with the revelation of the actually villainous forces of Law and Order as they stood at the time (if the facts match enough, no matter how much of a patchwork they are, the bloke's gotta be guilty and so will be hung), would have made a remarkable ending.

But, as it was, I was left wondering why the characters didn't smoke more (not a big hang-up for 1920s authors or readers), why Inspector Grant thought so much of the beauty and intelligence of the young Frenchman (men can appreciate the beauty and intelligence of other men, but I still felt there was something more here), and why some of the other apparently intriguing aspects of the book were actually hollow.

I still can't help wondering what Josephine Tey was actually trying to write. Had the book been written in, say, the 1980s, would it have been very different? Or was Miss Tey's view of life such that we just have to take what she wrote (including the retcon) at absolute face value? Are there no hidden depths?

Because if so, with my own knowledge of life "like wot it was lived" in the 1920s, I find aspects of The Man In The Queue very hard to swallow.

This was Josephine Tey's first detective novel, but I'm not sure I'll go any further.

Can anybody convince me otherwise?